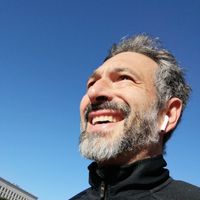 Phone
+39 010 2897 604
Address
Via Enrico Melen 83, Building B
Research center
CHT@Erzelli
About
I graduated at the University La Sapienza in the academic year 1999-2000 with a thesis on mathematical modeling of neurons supervised by Brunello Tirozzi (Physics department). Between 2001 and 2005, I carried out my doctoral studies at the University of Zurich CH with Amedeo Caflisch (Biochemistry department) focusing on the folding and misfolding of proteins associated with neurodegenerative disorders. As an associate researcher, I worked at the University of Cambridge UK (Chemistry and Genetics departments) under the supervision of Chris Dobson and Michele Vendruscolo. In the period 2005-2010, I participated in several computational and experimental studies on amyloidosis. I am life member of the Clare Hall College in Cambridge UK since 2011. From 2010 and until 2020 I have been PI at the Centre for Genomic Regulation (CRG) in Barcelona directed by Miguel Beato (until 2012) and Luis Serrano (since 2012), in the research program of Roderic Guigo'. I was awarded an ERC grant in 2013 for my studies on the role of coding and non-coding transcripts in regulation of amyloid genes. In 2014 I was tenured in Catalonia as ICREA professor of Life and Medical Sciences. In December 2018 I became full professor of Biochemistry in the Department of Biology at University La Sapienza. In 2019 I started to work at IIT. In 2020 I was awarded an ERC grant for the study on the composition of phase-separated assemblies. This ERC is a Synergy grant and involves collaboration with Giancarlo Ruocco and Irene Bozzoni. In march 2020 I became PI at IIT where I lead the RNA System Biology lab. Together with the official members of the group, there are also Dr. Claudia Giambartolomei and Dr. Elsa Zacco from the Non-coding RNAs and RNA-based therapeutics lab. Elsa and Claudia are the pioneers of our RNA System Biology lab and joined IIT in early 2019. Jakob Rupert, PhD student from Sapienza university, is also member of Tartaglia's lab. Edoardo Milanetti, Lorenzo Di Rienzo and Mattia Miotto, previously in Anna Tramontano's group and now working at IIT CNLS with Giancarlo Ruocco are honorary members of the lab. Since September 2020 I am MAE (Member of Academia Europaea).
Education