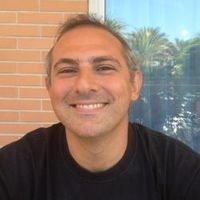 Virgilio Mattoli received his Laurea degree in chemistry (with honours) from the University of Pisa and the Diploma in Chemistry from the Scuola Normale Superiore of Pisa in 2000. In 2005 he received his PhD in bio-engineering (with honours) from Scuola Superiore Sant’Anna, with a thesis focused on the control and integration of miniaturized devices for environmental application. In summer 2004 he was visiting researcher at the University of Stanford, Center for Design Research, working on sensors and controls modules for biomimetic robotics applications. In 2005 and 2008 he was a short term visiting researcher at Waseda University (Tokyo, Japan) working on a bio-inspired mini-robot and on development of ultrathin freestanding polymeric films. From June 2008 to October 2009 he obtained a temporary position of Assistant Professor of bioengineer engineering at the Scuola Superiore Sant’Anna (SSSA). From November 2009 to July 2015, he has been a Team Leader of the Smart Materials Platform in the Center for Micro-BioRobotics of the Italian Institute of Technology (IIT). In August 2015, he obtained a permanent position as Researcher Technologist at the same center (now Center for Materials Interfaces). His main research interests include: smart nano- and bio-inspired materials, micro/nano-fabrication, soft/tattoo electronics, sensors, and biorobotics. He is currently involved in several research projects on these topics, including the EU FET Project 5D NanoPrinting of which he is the coordinator. He is author or co-author of more than hundred fifty articles on international journals, of more than about thirty-five invited talks, and of several conferences communications/proceedings and deposited patents.