The aim of this corpus is automatically detecting emergent leaders and their leadership styles (autocratic or democratic) in a meeting environment. It contains 16 meeting sessions. The meeting sessions are composed of the same gender, unacquainted four-person (in total 44 females and 20 males) with the average age of 21.6 with 2.24 standard deviation.

The experiment takes place inside a room as follows.

An example set up of the meeting is as follows. 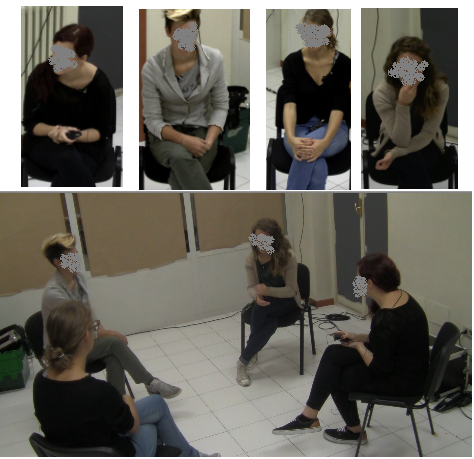 The participants performed one survival task, randomly chosen between two tasks: winter survival and desert survival which are the most common tasks about small group decision making.

The corpus includes the following:

When using this data for your research, please cite the related papers in your publication:

For more information please see the paper and/or contact the first author of the paper: Cigdem Beyan.

How to get the dataset

To obtain this dataset, we ask you to complete, sign and return the form below. After that, we will send you the credentials to download it. Note that the dataset is available only for RESEARCH purposes.