Mouse behavior analysis plays a key role in pre-clinical research for the investigation of diseases characterized by behavioral dysfunctions, like sleep disorders, autism spectrum disorder, social anxiety, schizophrenia and other social and non-social disorders. Mouse models are increasingly used to understand the biological basis of many pathologies. Indeed, behavior analysis of genetically modified mice allows to get insights about particular genes, phenotypes or drug effects on specific disorders.

Mouse behavior analysis is usually performed by manually scoring actions or events of interest in recorded experiments. While large datasets are required to evaluate behaviors with a significant statistical relevance, extensive recordings pose serious issues to be solved, as the manual annotation can be extremely time-consuming and prone to errors. Hence, the throughput of behavior analysis techniques can be considerably increased by automatic or semi-automatic tools leading to advantages in time, repeatability and precision.

To this aim we exploit our expertise in Machine Learning, Pattern Recognition, Signal Processing and Image Analysis to harness multiple recording modalities and develop algorithms that push forward the limitations of current mice behavior analysis tools. A technological evolution much needed for all behavioral studies. Indeed, our group does research and develops methods for the analysis of mice behavior ranging from basic statistics on tracking of single mouse to the analysis of concurrent multiple-mice interactions. 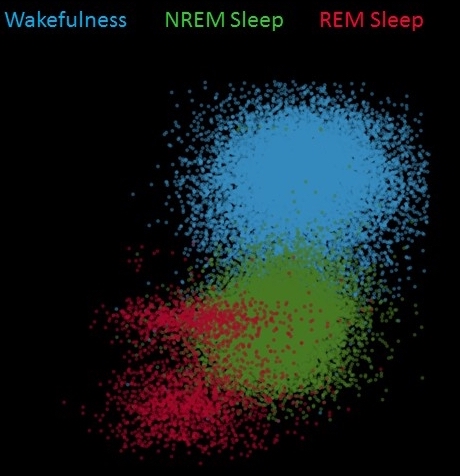 Sleep disorders are important clinical problems encountered in medicine and psychiatry, and mouse models play an important role in preclinical studies of such pathologies, due to the fact that mice share most genes and gene functions with humans and other mammals. They also display brain electrical activity during sleep which has underlying similarities to that of humans' sleep. The main tools for studying the sleep in mice are Electroencephalogram (EEG) and Electromyography (EMG) recordings, measuring respectively the brain activity and the activity of skeletal muscles. To score different sleep stages, a manual analysis of recordings is usually performed. The goal of our research is, therefore, to provide tools that facilitate dealing with large experiments.

Machine learning methods have been extensively used for developing sleep scoring systems. However, direct comparison among these system was never carried out, because of the absence of shared standards and datasets. In our tests, we observed that the selection of an appropriate pre-processing pipeline is far more important than the choice of the classifier itself. Hence, beyond the creation of a sleep scoring system we are also interested in the definition of a good encoding of data

Automatic scoring of sleep stages is not, however, our primary focus. As for social behavior, our aim is to uncover the hidden structure in the data, discovering new useful feature configurations without being bounded by human perception and intuition that might limit the discovery of novel insights. The goal is, therefore, a different way of studying the sleep in mice based on unsupervised learning, supporting the analysis of large amounts of electrophysiological data.

To this end, in a way similar to the social behavior analysis, we employed latent variable models capable of spotting regularities in the data. Our experiments show that this approach allows for effectively discovering meaningful feature representations which characterize sleep stages at a finer granularity than the one commonly used by the experts. This allows to explore open questions, like the homogeneity of sleep stages, and present a methodology capable of performing multi-subject analysis uncovering behavioral differences between different groups of mice.